LONDON—U.S. oil prices were close to a six-year low on Monday, with investors largely shrugging off a report by the Organization of the Petroleum Exporting Countries that U.S. oil output could begin to decline later this year.

Markets were instead pulled lower by the prospect of Iranian oil flooding an already oversupplied global market. U.S. and Iranian negotiators are hoping to seal a tentative political agreement on Tehran’s nuclear program before an end-of-March deadline. This could pave the way for increased Iranian oil exports and would be bearish for prices, which are again under pressure after several weeks of relative stability.

April-dated Brent crude on London’s ICE Futures exchange fell 1.3% flirting with $54 a barrel. On the New York Mercantile Exchange, light, sweet crude futures for delivery in April traded down 1.3% to $44.27 a barrel. Last week, Nymex crude fell 9.6% to a six-week low. Brent crude lost 8.5% and has been down for two consecutive weeks. 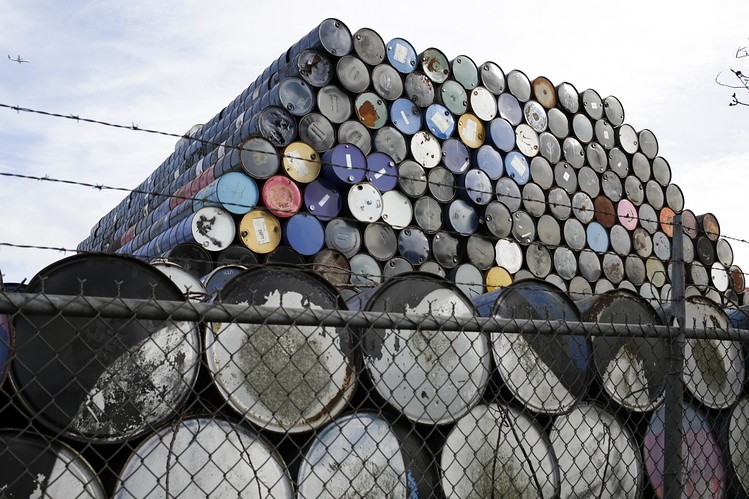 In its monthly report released on Monday,OPEC said that U.S. oil output may start decliningas early as the end of 2015. The group also edged up its global demand estimate for this year by 50,000 barrels a day to 92.3 million barrels a day, projecting that almost half of that demand growth will come from China and the Middle East.

As a sign of upcoming supply cuts in the U.S., the number of oil-drilling rigs has been falling in recent months, although the impact may take several months to show in the actual output. The rig count dropped by 56 to 866 last week, according to Baker Hughes Inc.

However, the rate of the decline has also slowed recently, suggesting that U.S. oil producers are delaying cuts in production capacity. And while U.S. shale-oil producers have slashed spending on drilling, they are poised to increase production quickly by focusing on their best oil fields.

“Naturally, lower rig count would suggest lower crude production; however, with new-well production on the rise, it is enough to taper off reductions in crude production,” Daniel Ang, investment analyst at Phillip Futures wrote in a report.

Talks between the U.S. and Iran are set to resume on Monday, though Western diplomats say serious negotiations over substance would still be needed in the months ahead before any international sanctions on Iran can be lifted.

“What happens with Iran is important because of the direct impact on oil supply,” said David Hufton of brokerage PVM.

Barclays analysts said that the perception that sanctions relief will lead to more oil on the market could pave the way for crude’s next move. “This supports our bearish view, and we see little likelihood of a bullish market reaction to developments in this space,” they wrote in a report.

However, sanctions won’t be removed in one fell swoop, the bank cautioned. “Even in a best-case scenario on sanctions relief, a sea change in Iranian oil exports is unlikely until after June,” Barclays says.

Nymex reformulated gasoline blendstock for April—the benchmark gasoline contract—fell 1.4% to $1.7382 a gallon, while ICE gas oil for April changed hands at $515.50 a metric ton, down $8.25 from Friday’s settlement..

—Benoît Faucon contributed to this article.

Write to Georgi Kantchev at georgi.kantchev@wsj.com

The author didnt add any Information to his profile yet